Interview with Zuhra Osmanović, a survivor of the Srebrenica Genocide 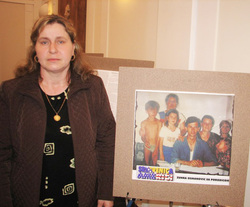 "Regarding Srebrenica’s Genocide I believe that we should dedicate July 11th to the Victims of Srebrenica so that what happened will not be forgotten. If we don’t talk or write about it, it will simply be forgotten as if it never happened," - Zuhra Osmanović.

On July 11th I tried to go into a truck with my kids. However when I was trying to cross the colorful dividing line that the Dutch Soldiers posted, one Serbian soldier came to me and took my son from my hands. He asked me how old was he, Mirnes said he was 15 but I said 13, I lied because I wanted them to let him go. I told him that he was wounded and the soldier asked if they hurt him. I was afraid and I said I didn’t know. I was fighting to hold on to my son but obviously the soldier was stronger than me and took Mirnes from my hands and took him somewhere, I didn’t know where. After some time I got in the truck and they took us to Tuzla.

Have you heard anything about your husband Azem and your son Mirnes since then?

I’ve been counting the days, months, and years. I thought it would take 2 to 3 months maybe a year or 2, but now it’s been 14 years. And I still don’t know anything about my son.

For Azem, they have already identified his bones. We had a funeral for him on July 11, 2006. I had been hoping that he would come back but now I have no hope for him.

For my son I still live with hope that he’s alive and that he will come back to me, God willing. I have pictures of my Mirnes and my Azem. I talk to them and look at them very often. I cry and I share my happiness and my sadness. If I have any happiness in my heart anymore. I still hope that with God’s help one day I will hear from or find something out about Mirnes, good or bad but the truth.

You have the pictures of your son with his friends. Do you know what’s happened to those boys who are the same age as your Mirnes?

I have one picture with my son and his 2 friends from school, one of them is Nermin and the other one I forgot his name. I’m pretty sure that they did not survive. I also have the complete class picture of Mirnes’ class. The teacher was Serbian of course, that’s how it was at that time. I think that many of those kids did not survive but I know that Azem (boy in picture) did survive and I saw him in 2001. He was with me and Mirnes when we were captured in Potocari. I kept Mirnes close to me and didn’t let him go anywhere without me but as for his friend Azem his mom did not keep him close to her. Thank god Azem survived but as for my Mirnes who was close to me the Chetniks were stronger and took him from my hands. Mirnes was 14 and a half and now he would be 29. I would like to see his face, his height, and his health. I remember his blue eyes and his baby face although he was beginning to become a young man. He was just starting to grow.

What is your message to the world regarding July 11, 2005 and Srebrenica Genocide?

Regarding Srebrenica’s Genocide I believe that we should dedicate July 11th to the Victims of Srebrenica so that what happened will not be forgotten. If we don’t talk or write about it, it will simply be forgotten as if it never happened.

I personally can never forget July 11th and the 11th day of every month I am reminded of something so horrible that should have never happened. You might not understand how I feel and I hope that you never will. My case and the many others in Bosnia and Herzegovina are similar to every city in Bosnia not just Srebrenica. You can only fully understand something if it has actually happened to you and I would not want that to happen to you. I lost my son and many other mothers lost their sons. Sons are children that are just born, 1 year, 20 years, 7 years, 25 years, or 50 years, they are all sons of their mothers.

I remember a guy named Hassan Halic he was with my Mirnes when the Chetnik took Mirnes. His mother was around 70 years old and he was around 50. When they took Hassan, he told his mom, “Mom please help me!” I could never forget that. That man has his own family, own children, and a wife, and still asked his mom to protect him.

I know a similar story about the Osmanovic family from my husband’s side, his cousin, Memlo asked a woman with a child and a bag to be his wife for 5 minutes. She looked at him puzzled and asked why? He answered, ‘because I need to cross the tracks. Give me your child.’ She agreed. She gave him the child and he held the child in his hands and put her bag on his back and wrapped his arm around her. A Chetnik just told him you go on the left side. “What about the baby?” he asked. The Chetnik answered, “Give it to the woman”. At that same moment the Chetniks put Memlo Osmanovic, Mirnes, Hassan Halic and Orhan to the left side of the tracks. They didn’t care how old they were. Memlo was around 25, my son was only 14, Orhan was 14, and Hassan 50. They took all generations of men. That’s why we can never forget the genocide that the Serbs did, especially in Srebrenica. And again I would like to repeat that we need to write, talk, and put it on the radio, TV, newspapers. Everywhere, everywhere, everywhere. So that it is not repeated and does not happen again.

Could you tell us about your live today? What are your hopes?

Now I’m living with my daughter in Chicago, Mersa. She’s married and has a beautiful child. My grandson’s name is Dino. In my Dino, my Sanja (interviewer), I see my Mirnes’ eyes. I look and look at Dino looking for Mirnes’ mouth, his eyes, his ears, but only his eyes are the same as Mirnes. I could cry and cry, but I still live in hope that I will find out news about my son whether he is alive or dead. If they can find his bones like other people from Srebrenica. There are many thousands and thousands of people from Srebrenica that are dead. And then he could rest in peace in the black soil with them.