With Šešelj's Release from the Hague, Can There be Justice on the Ground in Bosnia? 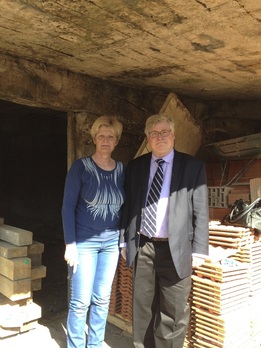 
The recent release of ultranationalist demagogue Vojislav Šešelj1 from his detention at the Hague, for "compelling humanitarian reasons,"2 raises new questions about the legacy of the International Criminal Tribunal for the Former Yugoslavia (ICTY). Šešelj is charged, for example, with having "made inflammatory speeches in the media" and with having "espoused and encouraged the creation of a homogeneous 'Greater Serbia,' by violence, and thereby participated in war propaganda and incitement of hatred towards non-Serb people."3 Upon his arrival in Belgrade following his release, Šešelj re-affirmed his commitment to pursuing a "Greater Serbia," and brazenly asserted that he would never return voluntarily to the Hague. In addition to his "extreme ethnic rhetoric," Šešelj is charged with "Persecutions" as a Crime Against Humanity, including murder, torture, and deportation.4 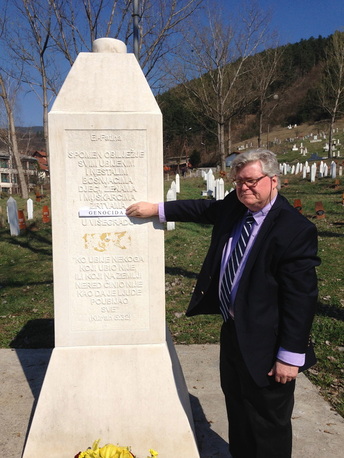 By my presence in the Stražište Cemetery today in Višegrad, I condemn genocide denial in Republika Srpska and specifically condemn the removal of the word “genocide” from the memorial to the victims of the genocide in the Stražište Cemetery, a removal carried out by the municipal authorities in Višegrad on January 23, 2014. On that day, the authorities forcibly entered the Muslim cemetery and defaced the memorial by scraping the word “genocide” from the stone memorial. Under the circumstances, this was a cowardly and heinous act of desecration and denial.

On February 27th at the American Philosophical Association meeting in Chicago: "Ethnonationalism and the Persistence of Genocide Denial in Bosnia and Herzegovina: Obstacles to 'Existence'”...co-sponsored by the Society for the Philosophic Study of Genocide and the Holocaust, and the Bosnian-American Genocide Institute and Education Center in Chicago. Participants speakers were: Senada Cvrk Pagan (CNAB), writer from Srebrenica; Mirsad Causevic, concentration camp survivor from Prijedor; Ferid Sefer, member BAGI; Sanja Seferovic, Drnovsek - Director BAGI;.

I hope that my presentation will contribute to a better understanding that a culture of denial of genocide through the memorial culture of monuments continues to shape the past, present, and future memories of the crimes committed during the Aggression on Bosnia and Herzegovina  (1992-1995); a systematic destruction of cultural memory, as an integral part of human rights, is prohibited by international law; the prohibited memorials to the Bosniak and other non-Serb victims in Prijedor, Visegrad, Foca and elsewhere reveal a policy of discrimination and apartheid in the Serb Republic ( Republika Srpska), an entity of Bosnia and Herzegovina; a denial of the fact-based truth about the crimes committed in Bosnia and Herzegovina —as established by the Hague Tribunal– particularly through the memorial culture of monuments serves to legitimize war crimes and results in further injustices for the victims, both legal and moral. Furthermore, it sets the foundations for potential future conflicts, while leaving the process of reconciliation facing certain failure; this insecure situation calls for international community interventions in order to re-establish respect for human rights, rehabilitation of values as an integral part of efforts to reconcile Bosniaks, Croats and Serbs and others in Bosnia and Herzegovina.

On behalf of Bosniaks in the U.S. and Canada and survivors of the Bosnian genocide, we protest the comments made by one of your activists Effraim Zuroff denying the genocide in Srebrenica and Bosnia-Herzegovina.  Serb nationalist newspapers reported today that Mr. Zuroff publicly denied that genocide took place in Bosnia-Herzegovina. According to their media, he stated there was no genocide in Bosnia-Herzegovina, thus reducing himself to a genocide denier (link: http://www.nezavisne.com/novosti/bih/Zurof-U-BiH-nije-bilo-genocida-224134.html).

We are writing to express our grave concern about the decision taken by the Republika Srpska Ministry of Physical Planning, Civil Engineering and Ecology, for the Višegrad municipality to carry out the destruction of a memorial erected in the Stražište cemetery, the central Muslim cemetery in Višegrad. The memorial was erected on May 25, 2012. On the same day, sixty Bosniak victims of the genocidal aggression were laid to rest in the cemetery, having been exhumed from the nearby river Drina and from Lake Perućac barely two years earlier in the late summer and early autumn of 2010.  Many of the victims had been murdered on the Mehmed Paša Sokolović Bridge and thrown into the river in 1992. When repairs on the nearby dam caused the river level to drop, the Bosnian Missing Persons Institute was able to locate the victims’ remains in the riverbed and Lake Perućac.

David Pettigrew, PhD, Professor of Philosophy, Southern Connecticut State UniversityProfessor Pettigrew also serves as a Member of the Steering Committee, Yale University Genocide Studies Program, and, as an International Expert Team Council Member of the Institute for the Research of Genocide Canada“We should ask why, seventeen years after the Dayton Accords, the international diplomatic community continues to tolerate ultra-nationalist rhetoric, hate speech and genocide denial in Republika Sprska?  It seems that the way we live should be at least as important as the way we vote.  A moratorium should be declared on campaign or political posters that inflict psychological harm on the survivors.  Moreover, the psychological harm caused by the posters, statues and ultranationalist gatherings should be seen as a form of persecution, that is to say, as a crime against humanity that should be prosecuted. Report on the October 7, 2012 Local Elections in Srebrenica, Bosnia and Herzegovina(Please click on the attachment to open the report)

As concerned representatives of American, Canadian, and European organizations and as intellectuals, we are requesting that you distance your organization from the comments made in the exclusive interview by Edward S. Herman, Professor Emeritus of Finance at the Wharton School of the University of Pennsylvania, where he spoke with host John Robles, the Voice of Russia, on his views regarding the events surrounding the Srebrenica Genocide -http://english.ruvr.ru/search.html?q=Dr+Edvard+Herman.

Edward S. Herman and other genocide deniers and revisionists of historic facts should not be allowed a platform to continue their hurtful campaign of double killing of the victims of genocide that occurred in Bosnia and Herzegovina.

Thank you for your response. As human rights organizations we also believe in freedom of expression however there are times when freedom of expression can deeply offend and impede on the rights of other individuals. Our statement seems to reflect Lone Star’s policy on freedom of speech. According to Lone Star’s policy regarding freedom of speech: II.D.1.09 - Use of College or System Space for Speech Activity indicates that “Any acts that are disruptive to the normal operations of the System or college sites including but not limited to classes and college business, or invades the rights of others will not be permitted.”

Dear Members of the USHMM Council:

On behalf of the survivors of ethnic cleansing and genocide in Bosnia and Herzegovina, of which many now live in the United States and Canada, we are writing to express our deep concerns regarding offensive and hurtful statements my by Michael Dobbs, a USHMM Fellow.

Open Letter to the UN Secretary-General

Immediately after your departure from Potocari, Srebrenica, where you paid your respects to the victims of genocide, Milorad Dodik, the President of Bosnia and Herzegovina’s (BiH) smaller entity, Republika Srpska (RS), went on to call RS a state and the country BiH a "community of states." Statements such as these are clear evidence that the conceptual creators and implementers of aggression and genocide are still present within the political scene in BiH....

Please, sign this petition and share so we can show that this company cannot just come in and erase the past. This is an important site for all the survivors and families of the victims, please help them out.

The grave injustice is currently taking place in Prijedor, Bosnia and Herzegovina at the ArcelorMitall owned mining complex Omarska – a former concentration camp.

The current Mayor of Prijedor, Marko Pavic, stated that a memorial in Omarska would undermine relations between different ethnic groups in Prijedor. This type of genocide denial is an additional burden threatening the lives of many returnees and survivors of concentration camps, ethnic-cleansing, crimes against humanity and genocide and it is deteriorating progress in regards to human rights and fundamental freedoms in the Prijedor municipality. The returnees and survivors over the years have faced a number of challenges but have reached a pivotal point this year by not being allowed to visit the Omarska site and hold a peaceful commemoration.

PLEASE: sign this petition and share so we can show that this company cannot just come in and erase the past. This is an important site for all the survivors and families of the victims, please help them out.

On behalf of survivors of the Genocide that took place in Bosnia and Herzegovina (BiH), we are deeply concerned with your decision to host Dr. Michael Parenti as a guest speaker for the May 31st fundraiser.[i] Dr. Parenti, a self-proclaimed “Balkan Revisionist” and author of To Kill a Nation: The Attack on Yugoslavia explicitly denies that genocide, systematic rape of women and girls and ethnic cleansing ever took place in BiH.[ii] Dr. Parenti places the blame on Bosniaks for the Genocide in Srebrenica and other massacres that took place throughout the war of aggression on BiH.

March 16, 2012 - Washington, D.C. - The Advisory Council for Bosnia and Herzegovina (ACBH) along with the Congress of North American Bosniaks (CNAB), the Institute for Research of Crimes Against Humanity and International Law, Institute for Research Genocide, Canada, Bosnian American Genocide Institute and Education Center and Bosniak Cultural Association sent a joint letter to Texas Governor, Rick Perry expressing our grave concern regarding the alarming language used in Senate Concurrent Resolution No. 39 which was signed on June 17, 2011.

Outlawing Denials of Genocide as a Genocide Prevention Method

Abstract: This presentation is an appeal to the international community to support the paving of a way for a legal ban, in the region of former Yugoslavia, of denials of genocide against Bosniaks during the aggression on Bosnia and Herzegovina from 1992 to 1995. Presently, in the region of former Yugoslavia, no legal measure prevents individuals and organizations from denying judicially recognized acts of genocide (Srebrenica genocide), nor does a measure exist to require the truth to be told in educational systems across the region–allowing the continuation of denials of genocide and the fueling of hatred in the youngest minds, those on whom we rely to create a better, more peaceful tomorrow in the region.

The Bosnian American Genocide Institute and Education Center  (BAGI)  is an educational organization  dedicated to scientific research pertaining to the genocide of Bosniaks  and to the education of others about the holocaust, genocide and other forms of crimes against humanity and international law. The purpose of the mission is reconciliation by teaching universal lessons that combat hatred, prejudice, and indifference.

Institute for Genocide Research Canada (IRGC) is pleased to inform the public that a well known genocide denier and anti-Muslim campaigner, Srdja Trifkovic, has been denied entry to Canada. As a result he was unable to give a planned lecture at the University of British Columbia in Vancouver. This is a welcome outcome that can be attributed to a determined and successful campaign by the Canadian and American Bosniak community.

I am writing to you as director of the Bosnian-American Genocide Institute and Education Center (BAGI) to request a clarification of Judge Flugge’s statement in Der Spiegel on July 6, 2009.  With Judge Flugge’s recent appointment to the Mladic case, this statement has resurfaced and been a cause of anger and protest of his appointment by several Bosnian organizations.

A Petition to the European Union

A petition to the European Union to demand the paving of a way for a legal ban, in the region of former Yugoslavia, of denials of genocide against Bosniaks during the aggression on Bosnia and Herzegovina (BiH) from 1992 to 1995.