The passing of Honorary Board Member, Mensur Seferovic is an immense loss for our community 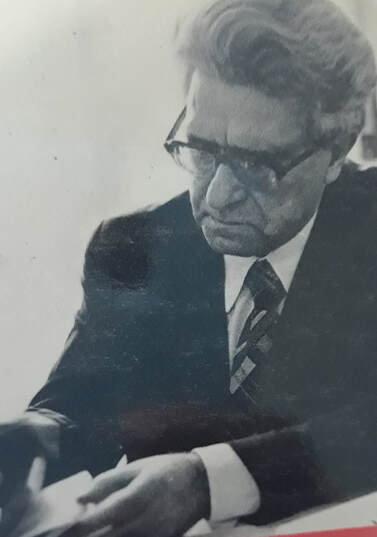 It is with absolute sadness and grief that we are regrettably announcing the passing of Mr. Mensur Seferovic, an Honorary Board Member of the Bosnian-American Genocide Institute.

He was born in Mostar, Bosnia and Herzegovina on November 25th, 1925. Mr. Seferovic was a concentration camp survivor, he was interned at a camp in Southern Italy during World War II. He was an anti-fascist fighter who carried on his beliefs of anti-fascism through his research and writing. From 1955 until 2014 he published 24 books. These books are records of his research and untold stories that span the Balkans.

​Mr. Seferovic was a prolific writer, a detailed record keeper and an empathic storyteller. This is an immense loss for our community and we want to ask everyone to keep Mr. Seferovic’s family in mind during this difficult time. The Board of Directors sends their condolences to the former President of the Board, Sanja Drnovsek and her siblings, children and family during this time.

For more information about his work please visit:https://www.booksbyseferovic.com/. 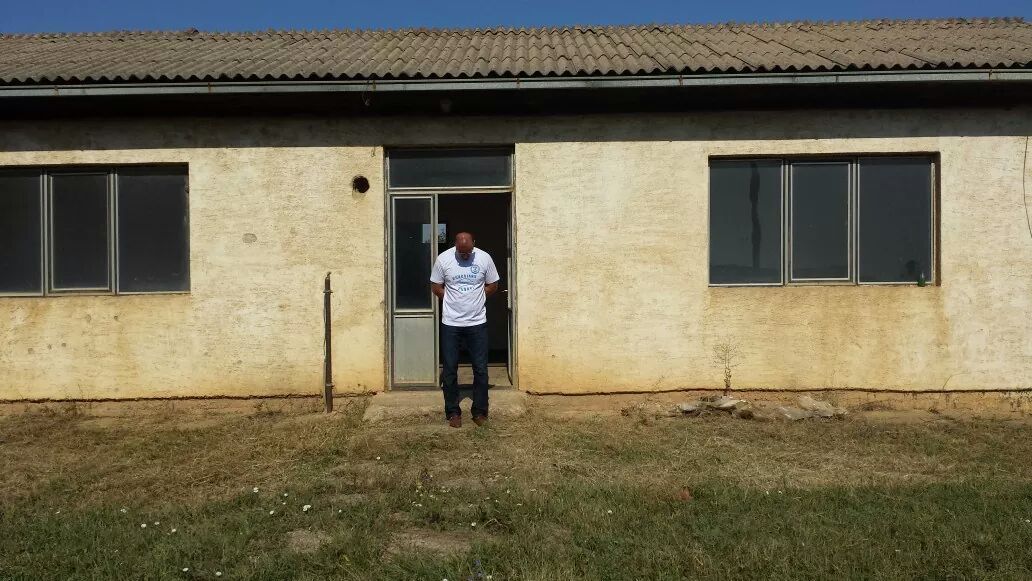 ​In 2021, we partnered with Remembering Srebrenica UK for Season 2 of Untold Killing, a six episode series that focuses on the Prijedor region of Bosnia and Herzegovina in the early stages of the war and genocide.

​Survivors from the diaspora as well as survivors who are still living in Bosnia and Herzegovina have been interviewed to retell the brutal story of Prijedor and focus on the stories of concentration camp survivors and victims.

This season will cover the camps’ political, international, and ideological implications, the personal stories of the Bosniaks held there, and the long-lasting effects on the camp survivors and their families, who now live scattered across the world (Message Heard / Remembering Srebrenica & Remembering Srebrenica UK, Untold Killing - Season 2 Trailer 2022).​ 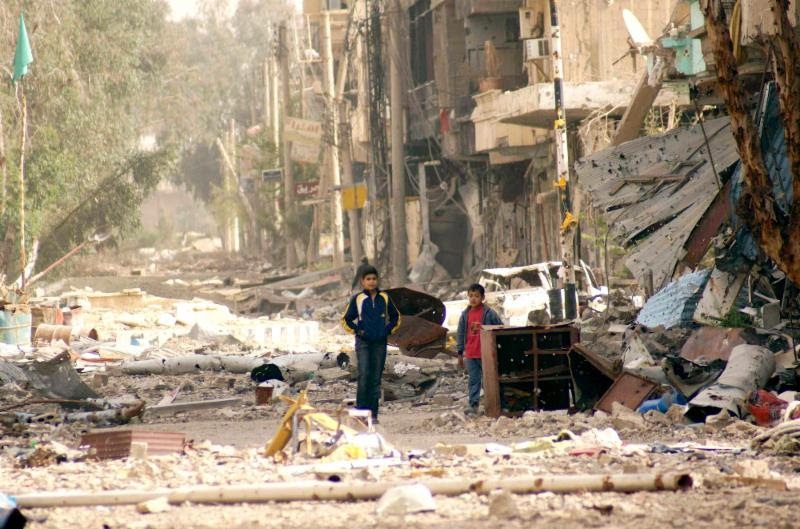 As the situation in Syria intensifies, we as a community know that it is important for us to stand with those who are displaced by war and genocide. This expert panel will explore the conflict and how refugees are currently being impacted.

How can we help the millions of Syrian refugees in Jordan, Turkey, Europe and elsewhere?

As the world faces the worst refugee crisis since World War II and the Holocaust, it is a reminder that we must speak out. We must offer compassion to the millions of innocent people who are fleeing brutality.

The cost of human life and loss in Syria is difficult to comprehend. Over 450,000 Syrians have been killed (approximately the population of Atlanta), 50,000 of those children. Another 4.8 million Syrians are refugees, with 6.1 million displaced within Syria. We must raise our voices.

Suzanne Akhras Sahloul
Founder and Executive Director of the Syrian Community Network, which connects refugees with services and fosters relationships with the larger Chicago community.

Tickets can be reserved here:
​https://www.ilholocaustmuseum.org/syria/. 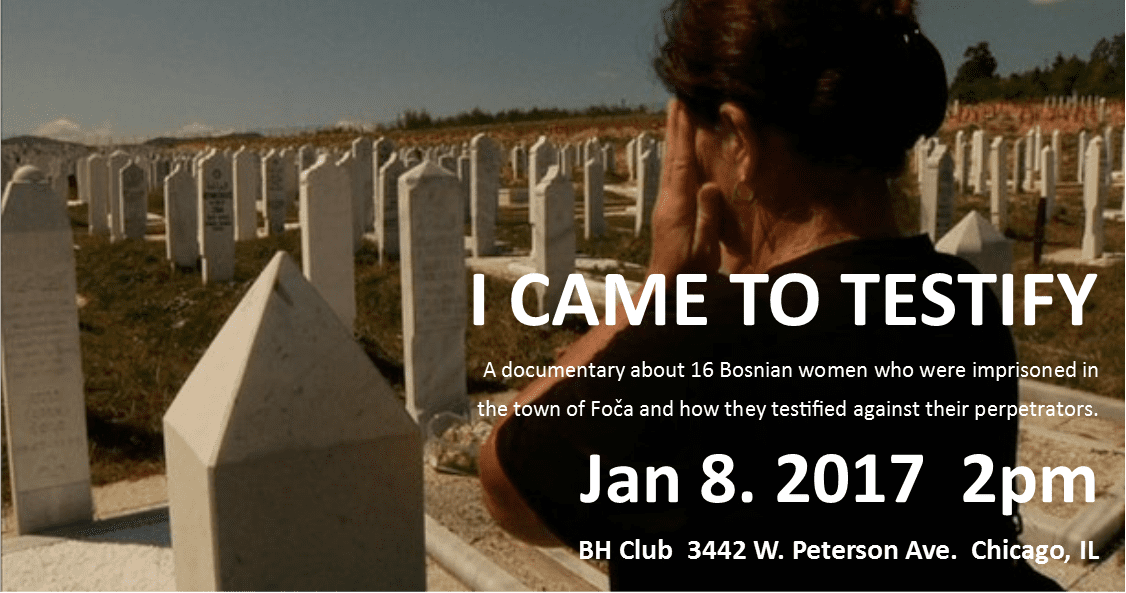 The Bosnian-American Genocide Institute and Education Center invites you on January 8th, 2017 to a screening of "I Came to Testify", a PBS documentary regarding 16 Bosnian women who were imprisoned in the town of Foča and how they testified against their perpetrators.
​
Join us after the screening for a panel discussion with BAGI board members and community experts.

Danica Anderson, Ph.D., is an author, a Forensic Psychotherapist and a current Gender Victims Expert for the International Criminal Court. Dr. Anderson is the founder and CEO of The Kolo: Women's Cross Cultural Collaboration, an international initiative aimed at providing support, psychotherapy and life training for victims and survivors of war, war criminals and offenders of sexual assault.

David Pettigrew, Ph.D., is a Professor of Philosophy at Southern Connecticut State University and a member of the Yale University Genocide Studies Program steering committee. Dr. Pettigrew is a human rights activist who strives, through his research and advocacy, to preserve and honor the memory of the victims of the genocide in Bosnia and Herzegovina, as well as to resist genocide denial and the glorification of war criminals in Republika Srpska.

Senada Cvrk Pargan, BSM, is the President of Bosniaks Cultural Community Preporod of North America. Ms. Pargan is also a well-known Bosnian poet and survivor of the genocide in Srebrenica. She is a tireless activist in the Bosnian community who is working towards cultural preservation and combatting genocide denial.

The event will be held in the English language and we strongly encourage students to attend. The event is free and open to the public.
​
We would like to thank our community collaborators: Preporod and B&H Club.

ŠTO TE NEMA investigates these universal issues by commemorating one specific genocide: the systematic killing of 8,372 Bosnian Muslims in the UN-protected safe area of Srebrenica in July of 1995. Serving as an alternative to traditional monuments and memorials, ŠTO TE NEMA generates public memory of the Srebrenica genocide by using different participatory models to make an annual nomadic monument. Permanent materials like stone and bronze are replaced with collected porcelain cups filled with coffee. Passive viewers and bystanders are transformed into allies.

Organized in close collaboration between the artist Aida Šehović and the local Bosnian diaspora communities, ŠTO TE NEMA is collectively assembled and disassembled by people on July 11th - the anniversary of Srebrenica genocide - each year, but every time in a different location. The monument consists of a growing collection of fildžani (small porcelain coffee cups) that are continuously collected and donated by Bosnian families from all over the world. Their number increases each year, roughly corresponding to the growing number of bodies found, identified and buried to date. Through dialogue and conversation the public is invited to participate in making the monument by placing the collected cups on the ground and filling them with Bosnian coffee prepared on site throughout the day. Nobody drinks the coffee that’s being poured into the cups as this symbolic gesture of serving coffee to someone who is no longer here is meant to memorialize their absence.

ABOUT THE ARTIST Aida Šehović is a Bosnian-born artist whose work grapples with displacement, loss and trauma caused by war through a combination of ritual and politics. Born in Banjaluka, Bosnia and Herzegovina, Šehović arrived to United Stated as a refugee in 1997. She received a B.A. (2002) from the University of Vermont and an M.F.A. (2010) from Hunter College. Her work has been exhibited at the Queens Museum, Socrates Sculpture Park, Grand Central Art Center, and the Flux Factory. Šehović is a recipient of the Fellowship for Utopian Practice from Culture Push, the Emerging Artist Fellowship from Socrates Sculpture Park and the Jacob K. Javits Fellowship, and was an artist in residence at the Vermont Studio Center, Santa Fe Art Institute and the LMCC Process Space Residency. Her on-going and recurring monument to the Srebrenica genocide called ŠTO TE NEMA has traveled to 11 different cities in the US and Europe since 2006. This year, Šehović is working together with the Bosnian diaspora communities in Chicago to bring ŠTO TE NEMA monument to their city on July 11, 2017.  She lives in New York City.

We are writing to urge you to advocate for a memorial for the 3,167 victims of the aggression perpetrated by the Bosnian Serbs against non-Serbs in Prijedor Municipality, which began in 1992.

The atrocities that were committed have been extensively documented in the proceedings of the International Criminal Tribunal for the former Yugoslavia, and in published books and other reports. There have been numerous convictions of the perpetrators, including on appeal, for the crimes that were committed in Prijedor Municipality. However, while the perpetrators have been glorified, for example, in a memorial adjacent to Trnopolje concentration camp, family members of the victims have not been permitted to erect a memorial either in Trnopolje, or in the location of Omarska concentration camp, or in the center of Prijedor. Repeated efforts to erect a memorial have been frustrated by the Prijedor Municipal Assembly.

With the public glorification of the perpetrators, the prohibition of a memorial for the victims is clearly discriminatory.  This prohibition constitutes a human rights violation, as well as a violation of Annex 7 of the Dayton Peace Accords. Annex 7 guaranteed the right of refugee return "without risk of intimidation, persecution, or discrimination." The parties agreed to create "social conditions conducive to the voluntary return and harmonious reintegration of refugees and displaced persons, without preference for any particular group."[i] The discriminatory prohibition of a memorial for the victims is a form of humiliation and psychological intimidation that discourages refugee return, impeding the original intention of Annex 7, and preventing the possibility of local reconciliation that such a memorial could facilitate.

In villages in the Prijedor area, such as Bišcani, Hambarine, and Kozarac, civilian homes, along with mosques, were shelled and burned.[ii] In this process, civilians were wounded and murdered. Witnesses reported houses being burned with civilians still inside.[iii] Groups of civilians were seized and transferred to concentration camps, including Omarska, Keraterm, and Trnopolje.[iv] In the camps, detainees suffered interrogations, inhumane conditions, food deprivation,  humiliation, beatings, and murder.[v] Women faced rape.[vi] Detainees held in the "white house" at Omarska, faced heinous treatment: "many detainees died as a result of these repeated assaults on them in the white house."

In his recent book, Death in the White House, Mirsad Causevic, who was tortured in Omarska, writes, "I watched my friend's skull cave in from a heavy blow, as his blood spattered everywhere. ...I felt a sharp blow to my left kidney...I looked around and saw my attacker wearing the uniform of a policeman... He hit me again. And again, until I could not take it anymore and collapsed to my knees with a cry of pain...he moved on to my head. I felt warmth as blood spurted from my face...I passed out."[viii] This was the first of endless beatings he experienced in Omarska: "Everyday brought new indignities, new cruelties, as dozens would perish to satisfy their bloodlust." Mirsad witnessed others being beaten to death.